Recipient of the 2016 Seattle Times Footlight Awards for “Best in Show” and “Standout Lead.”

The powerful debut play from Alexi Kaye Campbell, winner of an Olivier Award, the Critics’ Circle Award for Most Promising Playwright, and the John Whiting Award for Best New Play.

Two explosive love stories in alternating eras explore betrayal, forgiveness, and fate. The Pride examines changing attitudes to sexuality over a period of fifty years, looking at intimacy, identity, and the courage it takes to be who you really are. Some things may change, but the complexities of the human heart remain eternal.

“This is a searching, moving, thoroughly grown-up play, and a remarkable debut from a writer from whom I am impatient to hear more.”
—Daily Telegraph (UK)

Get your tickets here!

The cast and crew 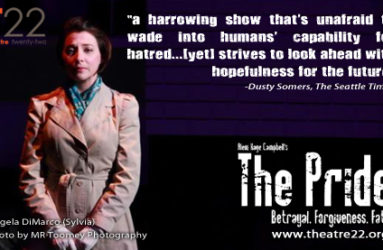 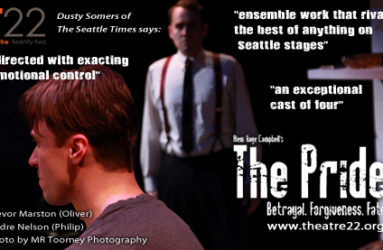 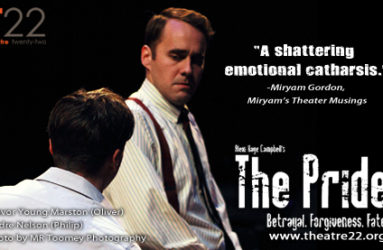 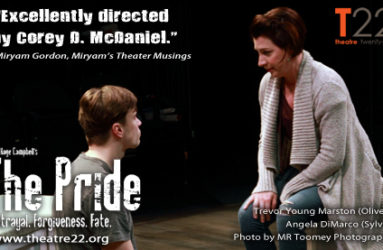 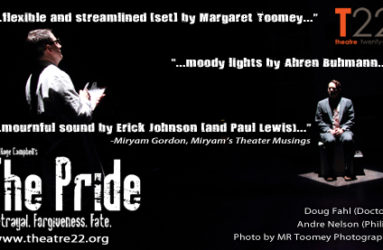 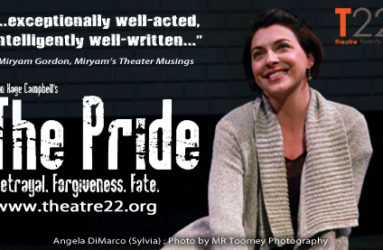 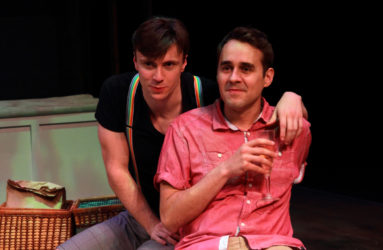 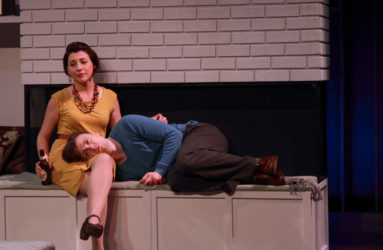 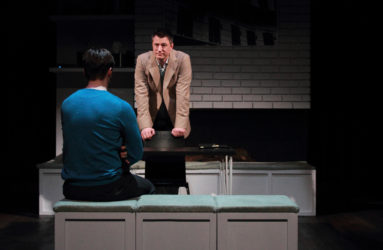 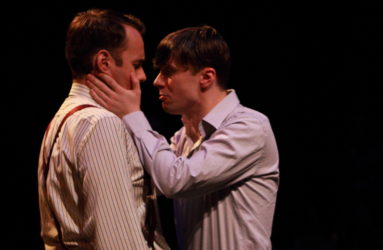 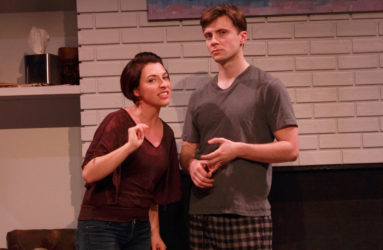 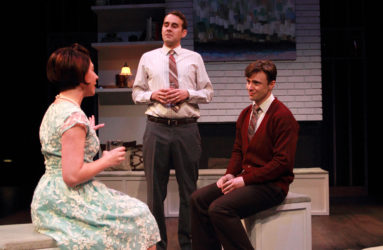 Angela DiMarco has been performing on stage and screen for over 20 years. She is thrilled to have The Pride as her Theatre22 debut. Angela is a three-time Gregory Award nominee. Angela was Isa in the haunting world premiere of Knocking Bird, made possible by The Umbrella Project. Some of her favorite shows: Boeing Boeing at Seattle Repertory, The Foreigner at Village Theatre, andAngels in America at ReAct Theatre. Angela has appeared on NBC’s GRIMM and SyFy’s Znation. Her company, Mighty Tripod Productions, just had their feature film, Paralytic, in SIFF 2016. When not performing, Angela loves teaching with her husband at their studio, giving northwest artists a place to BE MIGHTY. Trevor Marston is blessed to be working on such a powerful and intimate play with such wonderful people and friends. A Seattle-based actor and producer, he most recently appeared in Hamlet, Romeo and Juliet, Mrs. Warren’s Profession, and Titus Andronicus for Seattle Shakespeare Company and performed two years with the company’s statewide touring productions. He has performed locally with Book-It Repertory Theatre, Seattle Public Theater, Playing in Progress, Island Stage Left, SOAPfest, ReAct Theatre, and the 14/48 Projects. As a producer, Trevor has helped bring to the stage the world premieres of For Christmas by Nick Edwards, A Cure for Pain by Stephanie Timm, Boots by Libby Matthews, and Barbarians, a devised piece with SITI Company associate Jeffrey Fracé. He earned his MFA from the University of Washington’s Professional Actor Training Program. Doug Fahl makes his Theatre22 debut with this show. Doug has performed with several Seattle-area theaters over the past twenty-five years, including: Village Theatre (Billy Elliot, Beauty and the Beast, Hello Dolly, South Pacific); Seattle Musical Theatre (Sweet Charity, 9 to 5,Cabaret); SecondStory Rep (Little Shop, Chess,Little Night Music); Seattle Rep (Great Gatsby); ArtsWest (Shipwrecked); Stage Right (Boys Next Door and the Gregory Award Winning production of Into the Woods); and Annex (Yellow Kid,For Lorne, Cat Like Tread). Doug also stars in the 2009 comedy-horror film Zombies of Mass Destruction, released as part of Lionsgate’s After Dark series. He has featured roles in several other independent films including PUNCH, Dead Men, and Junk!. He’s also leant his voice to various film and commercial projects. Doug continues to divide his performance time between stage and film, but has also started focusing on the emerging medium of virtual reality gaming and experiences. Doug would like to thank Corey for the opportunity to dig into some exciting character roles amongst a brilliant cast of actors.

Originally from Seattle, Margaret Toomey has trained and worked nationally as a scenic and costume designer. Her most recent Seattle-area design will be costumes for Sound Theatre’s The Last Days of Judas Iscariot. Other Seattle credits include South Pacific at Seattle Musical Theatre and Hair at Bainbridge Performing Arts. Prior to returning to Seattle, Margaret was honored with three (of five) nominations for excellence in costume design at the inaugural Theatre Bay Area Awards in 2014 for her designs of The Color Purple at Hillbarn Theatre, and Dreamgirls and In the Heights at Broadway by the Bay. Margaret’s work has also been seen at Triad Stage (North Carolina), WaterTower Theatre (Texas), and Portland Stage (Maine). Margaret received her MFA in Scenography from UNC Greensboro and her BA in Theatre from Grinnell College in Iowa.

An alum of Mesa State College in Grand Junction, Colorado, Ahren hails from the wide state of Wyoming. He has been designing sets, lights, and projections for various companies around Seattle for the last eight years. Previous shows include Bernie’s Apartment, The Other Place, Annapurna, Ernest Shackleton Love Me, Wizzer Pizzer, Dogfight,Urinetown, Jerry Springer: The Opera, Les Miserables, and August: Osage County. He also dips his toes into the local film scene—both behind and in front of the camera—appearing in ZOE’s, JourneyQuest 2, The Gamers: Hands of Fate, Scotto Moore’s The Coffee Table, and co-creating the web-series &@. Ribbet.

Robin is a freelance set and props designer who has been working in the Puget Sound region for over ten years. The Pride will mark her fourth show with Theatre22. Professional credits include: technical work with Seattle Shakespeare Co, Cafe Nordo, Youth Theatre NW, The Satori Group, Bainbridge Performing Arts, Annex Theatre, Live Girls! Theatre, Freehold Theatre, and Ese Teatro. She is the Scene Shop Supervisor at the University of Puget Sound, as well as FOH manager/Resident Set Designer at the Theatre Off Jackson.

Stephen is new to Seattle. He has made sets for: The American Stage Festival, Dorset Theatre Festival, M.I.T., University of South Carolina, and his own small theater companies: Vest Pocket Traveling Theater, Imperfect Theater Company, and 73 Seat Theater. To see a sample of his work visit: part-time-setmaker.com

Paul is a Seattle-based playwright and composer whose recent projects include The Crossing, A Musical (Theater Schmeater); a musical adaptation of the children’s literature classic Caps for Sale (Boston Children’s Theatre); Oblivion (Driftwood Players, following staged readings at Atlantic Stage, Raven Players, and HRC Showcase Theatre); and The Hours of Life, A Musical (Theatre22). His drama The Names was recently chosen for a staged reading by Equity Library Theatre Chicago. Paul’s one-act pieces have been staged at play festivals across the country, winning Best of Festival awards at a number of these. He is a member of BMI and The Dramatists Guild of America. Website: paullewis.work

Marianna works locally as an actor across all media as well as a coach for dialect, presentations and accent modification. Recent coaching credits include Joyful Noise at Taproot, and The Brothers K at Book-it Rep. MFA: UW. Love to AK.  www.mariannadefazio.com

Phil is thrilled to be telling this story with Theatre22. Selected previous production credits include Camelot (Drury Lane Oakbrook), South Pacific (SMT), ecstasy (Florida State University), and Into the Woods and Godspell [2012] (Leavenworth Summer Theater). Many thanks to Corey for inviting me into the family! www.philip-lacey.com

Erick was born and raised in Ashland, OR where he developed his love of theatre and sound. He has worked as an audio engineer for Blackstone Audiobooks based in Ashland, and the audio production crew at the Britt Fest in neighboring Jacksonville. He holds a Bachelor’s in Sound Arts from Ex’pression College of Emeryville, CA. Most recently he was the sound designer for Island Shakespeare Festival’s productions of Julius Caesar, As You Like It and Jane Eyre. He is super excited to be working with the wonderful people of Theatre22. 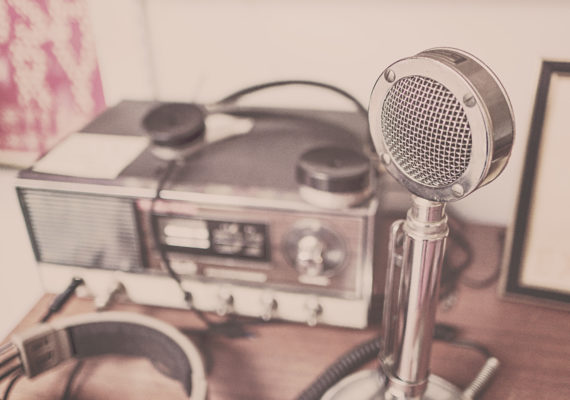 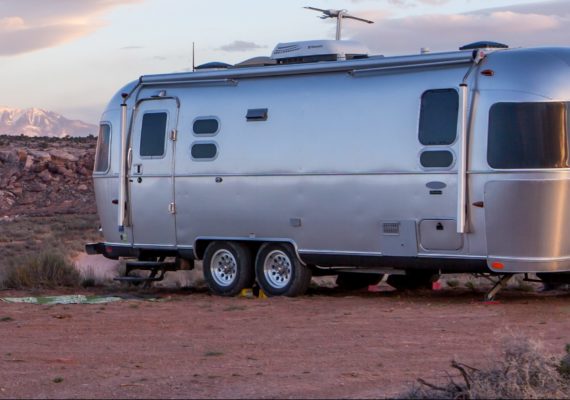