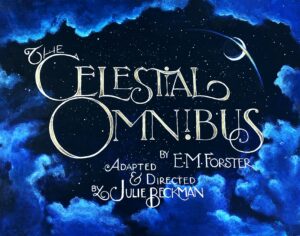 “The play pulls you in with an imaginative story, enchanting cast, and magical sound design. Between the ambient sounds and sound effects, I felt as if I were there, too, journeying with the immortals – feeling belittled by those in “reality” but at peace once in the realm of light and vivid rainbow reflections.”

THIS PRODUCTION HAS CONCLUDED

Theatre22 is proud to present our first On-Demand RADIO PLAY (streaming audio only~no visuals) as our first production since the onset of the pandemic.

Some of you might recall that Theatre22 was scheduled to produce the play Nonsense and Beauty last fall, which explores the true life story of E.M. Forster and his turbulent romance turned love triangle with a younger man.  We hope that we can return to production with that script sometime soon, but in the mean time — we have pondered and been inspired by the writings of Forster, who beautifully explored themes of longing and personal freedom and the importance of the inner life.  This brought us to The Celestial Omnibus, which has provided us with a powerful antidote to the pandemic by exploring the power of the imagination and the essential quality of the creative impulse in the expression of the human spirit.

So we hope that you can join Forster’s character of “The Boy” who travels to a Celestial realm accompanied by literary masters.  Combining whimsy, philosophy, and beautiful writing with a touch of the bizarre, you can expect to be transported.

Free or choose your price! Streams May 13th thru May 31st.

*Original Artwork for The Celestial Omnibus was created by artist, actress, and staff member, Jennifer Ewing. To see more of Jennifer’s work visit her website HERE.

The Cast and Crew 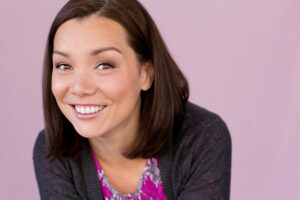 Sunam Ellis graduated in 2015 from the University of Washington’s Professional Actor Training Program, and since then, she has delved into the Seattle theater community, with productions and readings with ACT, Book-It, Seattle Shakespeare, Seattle Public Theatre, Sound Theatre, Seattle Rep, Theatre22, The Horse in Motion, and The Seagull Project. Favorite local roles include Margery in Hand to God (Gregory Award recipient), Bala in Sheathed (Gregory Award nominee), Marie in The Wellesley Girl, and Eleanor in Bring Down the House. Sunam also enjoys teaching the occasional theater class at local universities, including Seattle University and UW 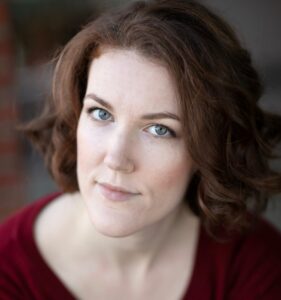 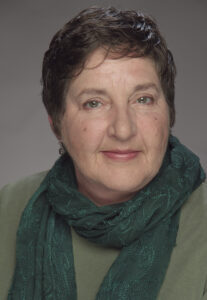 Mary Machala is one of the founding members of Book-It Repertory Theatre where she acted and directed for many years.  A former member of AEA & AFTRA, her acting credits also include work with Seattle Children’s Theatre, ACT, Seattle Repertory Theatre, Seattle Group Theatre, New City Theater, Theater Schmeater, ArtsWest and Seattle Shakespeare Company.  She was an improvisationalist with Dudley Riggs’ Brave New Workshop in Minneapolis, MN and the Artistic Director of the socio/political improv group, Off the Wall Players, where she authored, directed and acted in original improv sketches.  She has worked with regional theatres in Utah, Idaho and Minnesota and toured as Elizabeth I in Enter The Queen, an interactive performance piece she wrote for middle/high school students as part of Seattle Shakespeare Company’s education outreach program.  She played Sally in Theatre22’s first ever production of the Fifth of July and happy to be back working with this talented group. 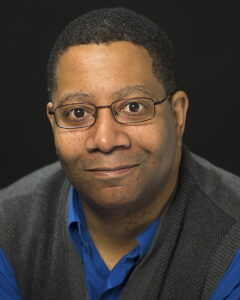 Bob Williams is excited to appear in his first project with Theatre22. 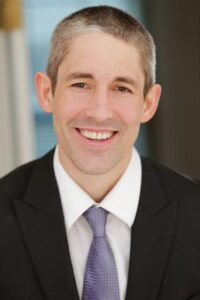 Jason Sharp joyfully returns to T22 where he was last seen as Danny Zuko and many others in Live! From The Last Night Of My Life (T22/Theater Schmeater). Audiences may recognize his voice from his turn as the Narrator in A Christmas Carol and as Jonathan Harker in Dracula (Harlequin Productions). Other Pacific Northwest credits include A Doll’s House (Tacoma Little Theatre), Clybourne Park (Toy Boat Theatre), Cherdonna’s Doll’s House (Washington Ensemble Theatre), Hooded Or Being Black For Dummies (Theatre Battery), Balconies, Team of Heroes Trilogy (Annex Theatre). Jason is also a veteran actor of 14/48: The World’s Quickest Theater Festival and Ian Bell’s Brown Derby Series. TV/Film credits include NBC’s GRIMM and Wes Hurley’s cult-classic web series Capitol Hill. www.sharpactor.com 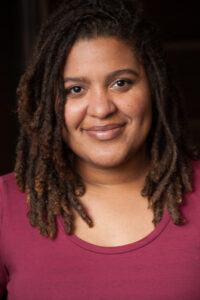 Jasmine Lomax is known in the Seattle community as not only an actor, but a playwright, director, and storyteller. Jasmine’s mission as an artist is to share as much new work as possible! They believe by doing so they are communicating the importance of generating new works of art. Some of their favorite past credits include Raisin’s in a Glass of Milk 2019 (a compilation of interviews from Artists of Color) at Taproot Theater, Baltimore (Directed by Malika Oyetimen), O, Beautiful (Directed by Michael Place). 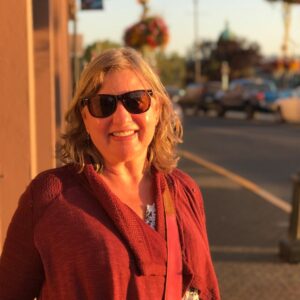 Julie Beckman is overjoyed to be directing with Theatre22 again in collaboration with this amazingly talented group of actors and artists.  She first adapted and directed The Celestial Omnibus in 1984 (!) with Porcupine Productions in Chicago and is happy to revisit the story and the adaptation with a whole new understanding.  Previous directing projects with Theatre22 include The Revolutionists, The Happiest Song Plays Last, Downstairs, Annapurna, Water by the Spoonful, and Fifth of July.  Outside of Theatre22, she adapted and directed Edith Wharton’s The Bunner Sisters, Bronte’s Jane Eyre, Dickens’ Hard Times, and a handful of short stories.  She has worked at several dozen theatres in Seattle and around the country including ACT, Book-It, Strawberry Theatre Workshop, Sound Theatre, MAP, eSe Teatro, Island Shakespeare Festival and 14/48, and is happy to be celebrating her 25th year in the Seattle area. 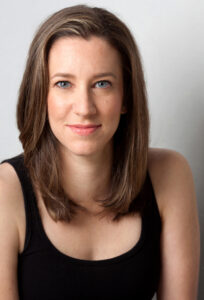 Since receiving her MFA at the University of Washington, Marianna has coached dialect at theaters across Seattle and is the resident dialect coach for Theatre22.  Her work was heard in Burn This, The Pride and The Happiest Song Plays Last.   Professionally, Marianna coaches individuals in accent modification, public speaking as well as voice & speech. She will be teaching Voice for Theater this fall at Seattle Pacific University. http://www.mariannadefazio.com/coach

Kyle is very happy to be working with Theatre22 again, having previously designed for The Happiest Song Plays Last, Downstairs, Annapurna, and Water By The Spoonful. He is especially excited to be undertaking this unique challenge of designing for T22’s first radio play. Over the past year of there being no live theater, Kyle has been fortunate enough to design for a few other audio plays – Dracula and A Christmas Carol (Harlequin Productions), and Childfinder (Book-It Repertory Theatre). During normal times, Kyle designed for over 50 productions in the greater Seattle area, including: American Junkie, Returning the Bones (Gregory Award Nominated for Outstanding Sound Design), Jane Eyre, The Brief Wondrous Life of Oscar Wao, Treasure Island (Book-It Repertory Theatre); The Merry Wives of Windsor, Love’s Labor’s Lost(Wooden O/Seattle Shakespeare Company); Our Country’s Good, The Pavilion, Take Me Out (Strawberry Theatre Workshop); Is God Is (Washington Ensemble Theatre); Mothers and Sons, 4,000 Miles (ArtsWest). Kyle is looking forward to getting back in a theater and designing for a live show again hopefully sometime soon! 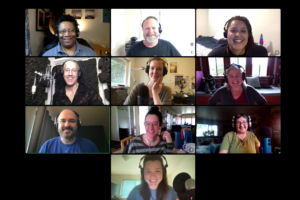 Special THANKS to our Sponsors! 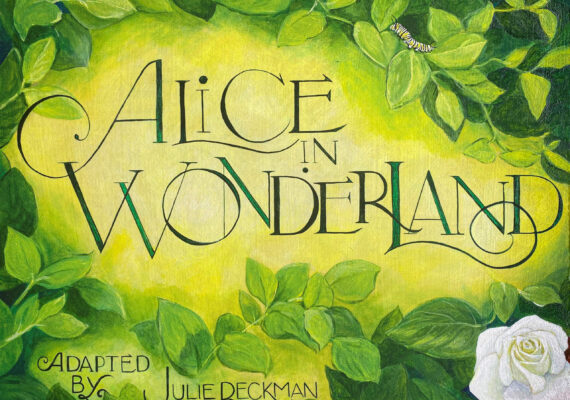